Yarraville had a big Greek population then, and we decided to come here. We lived in the house next to St Nicholas, Greek Orthodox Church for a month, before moving to our first rental in Francis Street before purchasing our first home in Simpson Street. The house has since been knocked down.

“I was born on 10 April 1935 in Komnina, a village in the Ptolemaida municipality of Greece. I am the first of three girls. Sofia is my younger sister, and our youngest sister Despina was born 18 years after I was born. When I was 15 I was learning how to be a seamstress, learning my craft for a few years before opening my own shop at 19. I enjoyed sewing and was teaching other women how to be a seamstress.

I didn’t leave the area and had only finished primary school, as this was just after the Greek Civil War. I remember being poor, and my father was in the army. I was doing well in sewing school, and my father had just returned from the war. Not knowing what to do, we opened a family café in Komnina as we lived in the town centre. Ptolemaida has a healthy climate and was more well-off and advanced than other surrounding regions. Most of the men in the area were the same age as my father.

By chance, I got to know the family of one of the first Greek Orthodox priests who arrived in Australia, Antonios Amanatidis. Antonios had gone to the war but was sent back when the Army found out he had four kids. When he returned he decided to leave his village in Kastoria and arrived in Ptolemaida.

Coincidentally, the priest in Komnina had just passed away, and there was no priest. Antonios took it upon himself to settle down in Komnina and became the priest of our village.

By then, I was busy teaching sewing and also involved in the church as a religious teacher. There was a lady who lived in the neighbourhood and she taught Grade 5 and 6. As I had a teaching background, it was only natural for me to begin teaching. I was pulled in to teach Grade 3 and 4. As I was teaching the kids about religion, I got to know the priest who had passed away. That’s how I got to know Antonios when he arrived soon after.

Four months later, Antonios’ son Dimitrios came to the village. By then, I was well-mingled within Antonios’ family. My paternal cousins had family ties within the village as well, so I was among family.

When Dimitrios and I met, there was an instant attraction. The problem was, my Dad had already arranged another man to marry me. He was from the same village. I didn’t even know who he was apart from him being a good person and was the same age as I was.

Dimitrios heard about this and he immediately wrote me a note and ‘kleftikame’ (eloped). It effectively means ‘I am going to come for you.’ He was insistent I was his. I was thrilled as my main concern was to get away from the other man.

We decided to leave the village one night and began walking at 9pm. We walked for the whole night towards another village, where Dimitrios’ friend was waiting for us.”

“When Antonios realized what we were doing, he asked his friend who had a tractor to pick us up and allowed us to continue our relationship. Dimitrios and I knew each other for one year, before marrying in 1955.

To be honest, if it wasn’t for Dimitrios, I wasn’t planning on getting married. I wanted to be a seamstress, run a business and teach in schools.

For the next seven years, I continued teaching in schools. My first and oldest son, Tony was born, and Dimitrios was kept busy serving in the army. However, we had a bigger calling – Australia. Dimitrios had family here, predominantly in Sydney and also in Adelaide. Wanting to be with family, we all arrived in 1962 by ship, stopping in Fremantle and Adelaide.

Yarraville had a big Greek population then, and we decided to come here. We lived in the house next to St Nicholas, Greek Orthodox Church for a month, before moving to our first rental in Francis Street before purchasing our first home in Simpson Street. The house has since been knocked down.

I had my second son in 1965, and my youngest son in 1972.
Within a week of arriving in Yarraville, I got a job as a seamstress. Dimitrios got a job in Smorgon’s Meat Abattoirs. We had friends and family here and were happy. In 1971, we made our first trip to Greece for a holiday with my two sons and were there for four months. I’ve since been back five times, with the last trip back in 1998. We’ve been involved in several businesses over the years and have had some losses. We are getting on well, so we had decided not to go back to Greece.

Dimitrios had remained in Melbourne. Where Yarra Lounge is now, there used to be a Greek restaurant owned for a few years, by Dimitrios and Eleni. Not long after we converted it into a café, the business closed. We also spent at least 20 years running our butcher shop where Cafe Terronistands now. Next door was also my brother-in-law, Niko’s kafenio (café) which is now L’uccellino. Niko also owned the local delicatessen where Creative House Yarraville is now located.

When I returned from my four month holiday in Greece, I was working in the restaurant as a cook and kitchen hand, followed by the butcher shop.

One thing was clear – I wasn’t sewing anymore.

Over the years, we have had family deaths and hardships. However, we are happy. Dimitrios suffers from Parkinson’s disease and relies on me to do the daily chores. Every day, we watch TV and sleep on the couch.

In 2016, my granddaughters Anatoli and Eleftheria along with their Uncle Tony approached me with the idea of opening a Greek restaurant under my name. Food would be prepared, sticking to my handwritten recipes. Until today, I still can’t believe it’s actually happened.

I have a stray cat that I’ve affectionately called Eleftheria. It comes in at 7am and 5pm, knowing it would be fed with food and milk. Truth is, I don’t even know the sex of the cat!

Looking ahead, I no longer have lofty ambitions to achieve anything else. I have lived my life. The only things that I would ask are for all my grandkids to stay strong, to enjoy and live their lives, right up to the day I go. I am still on my feet and I never fail to thank God for what I’ve got.”

“I was born in 1996. Growing up, I wanted to drop out in Year 10 and head to TAFE to focus on hair and makeup but my parents didn’t allow it. I completed high school, and like Eleni wanted to be a seamstress or in a design school. I’m more of a hands-on person than a bookworm. However, after I began researching I realised I had to head to uni so I decided against it as I didn’t want to be in school anymore.

Wanting to pursue my hair and makeup aspirations, I enrolled at Victoria Uni and pursued an 18 months course. During this time, I did a RMIT fashion shoot and worked alongside an Australian swimwear designer, founder of Myraswim. It was exciting.

In comparison, my sister Anatoli is the bookworm. She pursued a Bachelor, followed by a Masters and now works in the academic field.

I’ve always lived in the West. My primary and high school was in Altona, and I spent all my school holidays at Eleni’s, and my maternal grandmother’s house. Anatoli and I would have sleepovers, bake with them and soak in their passion for cooking. We would learn about where we come from, and just by being with them every day, we picked up the language as well.

Before the shop opened, I was working in salons in Port Melbourne and West Footscray, focusing on makeup. I’ve only wanted to continue Eleni’s legacy, and it has never crossed my mind that it wouldn’t be a restaurant. We have had a lot of help from family along the way, especially from my Uncle Tony who owned Mum’s Pizza Restaurant and Moonliters Pizza Café, right here in Yarraville from 1983 to 2003.

This shop used to be Marita’s of Yarraville, which occupied a much smaller area. When the lease came up, we were attracted to the amount of foot traffic. It was rare for a shop to be available for lease. Oddly enough, there are now some shops available for lease.

Looking back, we didn’t think it would take that long to set it up. There were a lot of hoops we had to jump through. During the construction period, I was still working in the salon, spending half my week there, and the other half here. Once we had some sort of framework to play with, I started getting involved in the construction. I helped with the tiling, the waterproofing, painting and even the sanding of the wood. I was involved from the ground up. This restaurant is my baby.

When Anatoli and I asked Eleni about continuing her legacy, she had no objections. Over the years, she has had all her recipes written down into a book. She has always handwritten them, so she would never forget them. The book is older than I am!”

“Obviously, we’re not the ones cooking in the kitchen; we’ve given the chef everything he needs to know and like every chef, he’s put his own twist to it. Our aim is to provide our customers with their own individual experiences each time they visit. We want them to get some kind of journey and connection with the food like we do.

Even after all these years, when Eleni and her girlfriends meet for coffee, she’d write down a new recipe whenever it’s brought up. This all happens between all the talking and laughing.

Their coffee sessions are a daily occurrence and it’s a whole day affair. She likes it, and it’s one big family. We are lucky to have Dimitrios as the patriarch of the family; as he has a big family in Melbourne, they all come here!

In the 19 months leading up to the restaurant opening, I did not anticipate the amount of work required. I threw myself into the deep end, and just went with it. As there was no one else to run it, I decided to run the restaurant. I worked in hospitality before but it was nothing like this. I’ve got the support of the whole family, and they give me the confidence to keep learning and bettering myself. It’s been a journey.

Anatoli has her day job but helps out on weekends. I like having the social interaction with customers. It’s like hairdressing, but it’s a different experience as I’m not looking over their hair! It gives me a real sense of pride, especially when they’ve enjoyed their meal.

My goals this year are to feel happy, support and manage the staff, tweak any problems the shop may have and most importantly to perfect things slowly.

I have never been overseas. I would like to go to Greece next year with my family, along with Eleni and Dimitrios. Whether it happens or not, it would be with Anatoli. My extended family – many of them are of similar age as we are in Greece and have only spoken through with us through Facebook and it would be amazing to see them.”

Thanks to John Ng from Humans of Sky for this story.

Cooking Authentic Greek in the West, Eleni’s kitchen and bar is located in the heart of Yarraville. 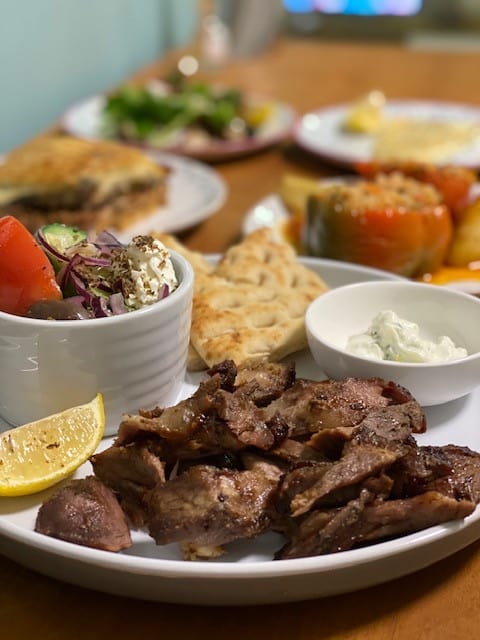 The World Cup of Food: Greece Vs Spain on 3AW 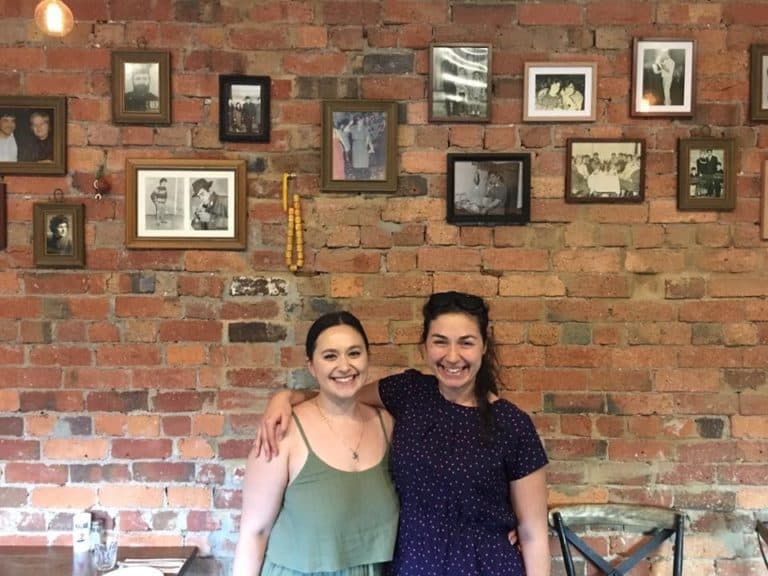 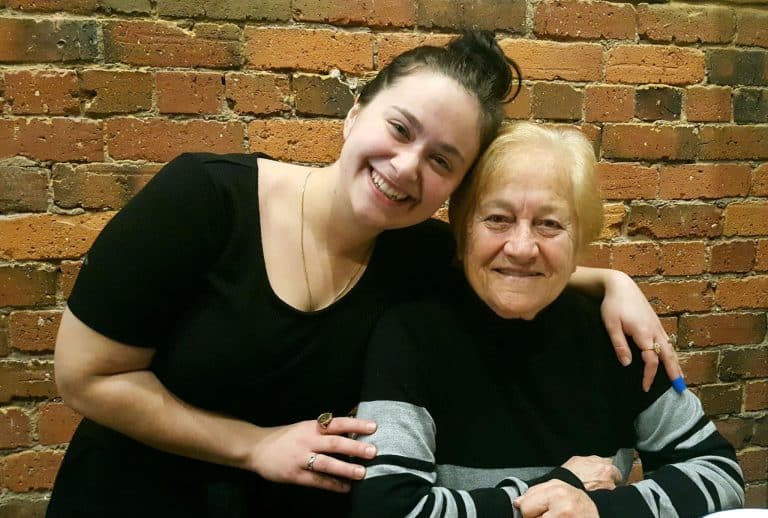